Today was my first day back working full hours in my job after my doctor reduced my hours due to anaemia.

There were a few emotions going round this morning:

Fear: I was a bit worried that I was not going to be able to cope with being back and that I was either going to feel too tired or feel overwhelmed, or just generally fail at my job. So far today, none of the above happened (bar the slight failure of me forgetting my entry pass...). Happy Emma!

Envy: I was quite envious of the me that had all those extra hours in the day to spend as I wished! Whilst when I was off I spent most of it sleeping and feeling miserable, now I'm starting to feel better there's so much I could do with that time! Today on the South Coast was so beautiful, and there's nothing I'd have liked more than sitting on the beach watching the world go by. Never mind, back to reality!

Relief: I had felt so guilty taking time off. I left some of my colleagues with extra work which I could no longer do, I was still costing the company money, and it must have been frustrating for people in the office seeing someone swan in at 10 and then leave at 2. Plus anaemia can exist at so many levels: from feeling super tired to not barely even being able to move, and I guess most people know the former type. Therefore I'm sure there were some people who just didn't understand how severe my tiredness and low energy levels were, and must have thought I was being pathetic.

Fingers crossed my energy levels really are getting back up there and the rest of the week at work goes smoothly!

I've tried really hard with my eating today as the bank holiday was tough. My parents and one of my brothers all came to London for the weekend and I prepared a picnic for my Dad's birthday on Sunday. It meant I had lots of cake, bread, pasta etc. around the house - all the foods I like to binge on. I ate far more than I felt comfortable with, but other than on Friday did not end up in a full-blown binge (it was one of the worst in a while). I'm feel bloated and fat today, and have tried to eat clean. My My Fitness Pal entry is below. 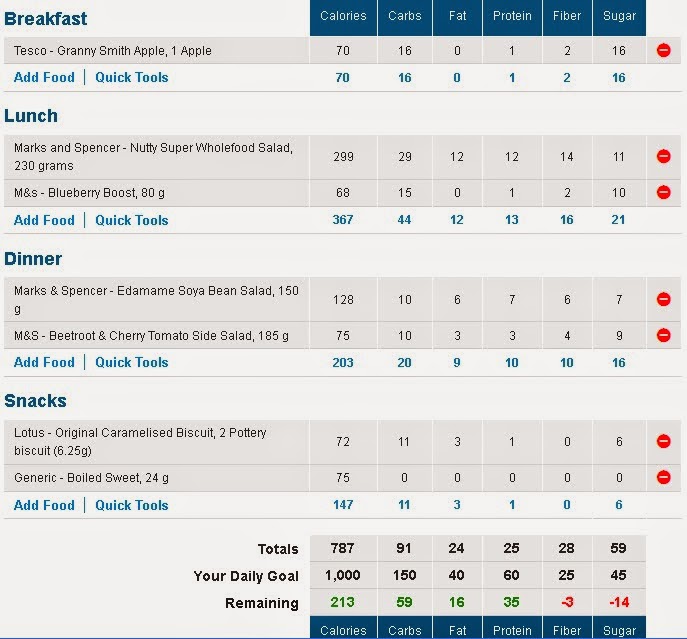 I'm obviously still low on calories, but this is more than I have eaten on many days (my mental number of calories I feel uncomfortable exceeding is 600 kcal - don't ask me why cos I don't even remember!). I want to try eating more to avoid bingeing. I'm hoping if/when I get to see a therapist they're going to have some magic tricks to make me eat more without the guilt...(I know that that will not be the case!).

In terms of nutrition, I'm happy with my fibre levels, and that's quite a lot of protein for me. I'm always eating too much sugar!

Exercise today was Jillian Michaels' Ripped in 30 week 3 - it's the first time I've done that workout, and it's tough! However I prefer it to all the plank action in week 2... I also did around 8,000 steps according to my pedometer, so not bad.

Have you ever taken leave of absence from work? How did it make you feel?
Posted by Eat Jog Glow at 21:23